Some city centres are defined by geographical boundaries. Others are marked by ring roads and highways.

In the Mongolian capital Ulan Bator, it is delineated by the central heating grid. 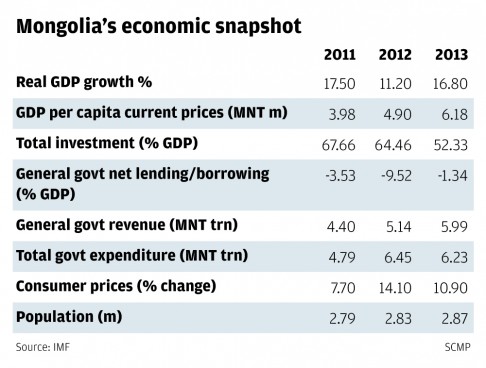 In a city where winter temperatures drop to minus 40 degrees Celsius, this network of underground pipes is a lifeline for residents trying to escape the cold.

Although expanded over time, its reach has failed to keep up with the city's growth. Home to almost half of the country's 2.8 million people, Ulan Bator has doubled in population since 2000, putting pressure on existing infrastructure and leading to a property-market boom that is unparalleled in recent history.

The potential of the market was the first thing to strike Lee Cashell.

After visiting Ulan Bator for the first time in 2001 while on holiday from his job as a Hong Kong-based venture capitalist, Cashell picked up three Soviet-era apartments for US$30,000.

"From my view as a venture capitalist, this was an undiscovered country. So I made my first investments in real estate. I had yields of about 60 per cent with no capital gains tax, very little income tax and rapid price appreciation. In my mind, it was the easiest place to invest anywhere in Asia at that time," Cashell said in his expansive, open-plan office close to Ulan Bator's century-old Choijin Lama Temple.

The chief executive of Asia Pacific Investment Partners (APIP), Cashell has, since 2001, built a business empire that in many ways mirrors the trials and tribulations of the Mongolian real estate market.

After quitting Hong Kong in late 2001 when the dotcom boom went bust, Cashell opened Mongolian Properties, the country's first real estate brokerage. He initially focused on finding properties for the growing number of expatriate families moving to Mongolia as international mining companies started investing. "I hung up my shingle and people started walking through the front door," he said.

The business grew steadily despite competition from local and overseas-backed entrants, and Cashell estimates he still has 80 per cent of the expatriate rental market. In 2003, his group expanded with the creation of Asia Pacific Land, a locally focused developer.

Specialising in mixed-unit retail and apartment buildings, the firm aimed to fill a gap at the upper end of the market. "We originally focused on expatriates, which initially meant a nicely decorated place, and secondarily meant places with decent security, and then thirdly meant integrated condominiums catering to the upper management level of expatriate," Cashell said.

"And then it turned out that wealthy Mongolians also liked this kind of building." In part concerned about the supply chain and overall construction quality, APIP acquired its own cement factory, Central Asian Cement, in 2008. That move was swiftly followed by the founding of Mongolian Properties Construction, which allowed APIP to target business opportunities outside of its own developments.

The company starting winning bids for a wide range of projects including car showrooms and bespoke offices. The city became a giant construction site. Underpinned by a decade-long boom in natural resources, Soviet-era housing blocks and offices in the area around Sukhbaatar Square - where the Great Khural parliament building is situated - have been torn down, replaced by stylishly designed and decidedly more functional retail and residential buildings characteristic of any modern capital.

In 2011, the government announced a "100,000 homes" construction project to be supported by financing for first-time buyers. Mortgages at 8 per cent interest issued by the government-backed Mongolian Mortgage Corp (MMC) were made available to buyers of units less than 540 square feet in size.

Previous rates were typically in the 16 to 19 per cent range. MMC data shows that the number of mortgage borrowers increased from 4,774 in 2005 to 29,447 in September of last year.

Real estate prices have risen eightfold since 2001. City centre apartments were selling for US$1,270 per square foot last year compared with US$150 per square foot in 2001, according to data from APIP. Residential rental yields are now in the 15 to 20 per cent range. Office prices have doubled since 2008. Even the recent economic downturn has not diminished the market's momentum. "It has kept it from going up," Cashell said.

One reason has been urbanisation. The city has grown outwards as a steady flow of rural migrants enter the city. Most were too poor to afford rental accommodation, and so took advantage of Mongolian laws that grant small pieces of land to each national to set up informal communities on the lower slopes of the hills that ring Ulan Bator.

Named ger districts, and home to an estimated 700,000 people, these areas are showing nascent signs of increased prosperity, with a slow metamorphosis from simple tent dwellings into sturdier and more durable wooden and stone bungalows.

Outside the heating grid and mains water supply, residents rely on wells and rivers for water, and in winter burn foraged materials to keep warm. As these can include discarded tyres and construction materials, the city is blanketed with an acrid black cloud of pollutants during winter. Air-quality standards are often the worst in Asia.

Even though construction site floodlights and cranes hum late into the night, developers say that consumer expectations are growing and there is still not enough quality construction coming to market.

"The vast majority of the construction these days is simply a skeleton with a cheap glass box around it, with minimal amenities and services allowed for. "It is common in Mongolia for the developers to go for a large return on their investment rather than sacrifice a portion of the profit towards the well-being of the end user."

Empty shells are appearing in parts of the city, with access to capital a recurring concern for companies across Mongolia.

Cashell has overcome this by selling equity. APIP now has 60 shareholders who have 16 per cent of the company. Cashell and his wife control the remaining 84 per cent.

To grow further, Cashell plans an initial public offering in London or Hong Kong within the next 10 months to raise US$160 million. For now, he pre-sells his apartments, shops and offices to fund construction.