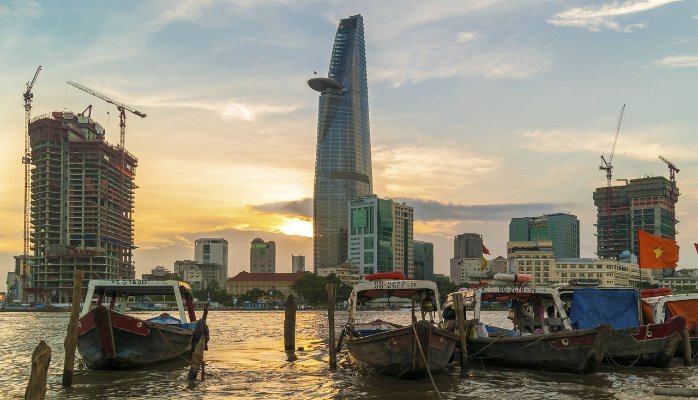 Foreign direct investment into Vietnam is set to grow sharply, the WSJ's Vu Trong Khanh reports. FDI pledges in the six months through June more than doubled from a year earlier to $11.3 billion, according to the government. Of the FDI pledges, 71.4% is to be invested in manufacturing and 5.3% in real estate, the ministry said. South Korea was the largest source of FDI pledges, followed by Japan and Singapore.

Although foreign direct investment is rising, the country’s economic growth target of 6.7% for this year now appears out of reach, Vietcombank Securities said. The company expects growth of 5.8%-6.0%.

Thomas Hugger, CEO and founder of Hong Kong-based fund manager Asia Frontier Capital, says his pan-Asian fund is reducing its exposure to Vietnam in favor of other markets in the region. AFC is also reducing its positions Sri Lanka, which Hugger says is facing a number of challenges, including low foreign reserves and rising inflation, that will limit investment returns.

He is much more enthusiastic about Pakistan and Bangladesh, and especially bullish on Iraq, whose market he says may have bottomed. “With oil prices stabilizing and the political situation there improving, the prospects for Iraq are much better,” he said.

Hugger is also upbeat on Mongolia. “We believe we’re at the bottom there. We’re keen on consumer goods and industrial companies,” he said.

This week’s parliamentary elections in Mongolia, which opposition MPP party won by a landslide, could give provide more cause for optimism. The party focused its campaign on reviving the country’s economy, which until recently had been one of the fastest-growing in the world.

Lee Cashell, head of Asia Pacific Investment Partners, which has significant real estate investments in Mongolia, told the Journal that one of the first targets for the new government is restoring confidence among foreign investors in Mongolia. “We expect to see the new leaders getting on planes to Asian capitals and to London to drum up foreign direct investment,” he said.

The MPP is considered to be more FDI-friendly than the current government, and Cashell believes investment will rise sharply. “I would expect FDI of $1 billion to $1.5 billion this year, and more like $2 billion to $2.5 billion next year. For a $12 billion economy, that’s a significant amount,” he added.

The Journal’s reporting team who broke the news about the problems with Mozambique’s so-called tuna bonds has dug deeper into the story. In a searching analysis, Matt Wirz, Julie Wernau and Matina Stevis reveal how the deal unfolded and detail the repercussions rattling the struggling country’s government.

Nigeria’s market continued to be volatile in the wake of the recent currency devaluation. The benchmark NSE 100 index ended the week down more than 4%, but at least one observer, Nick Padgett of fund manager Frontaura, was optimistic it would soon reverse direction. “We suspect Nigeria’s local stock price rally may resume after its Brexit interruption,” he said in a note this week.

Atlas Mara continues its march along the acquisition trail, announcing this week that it has completed its purchase of Finance Bank Zambia. The London-listed banking group, co-founded by former Barclays head Bob Diamond and Ashish Thakkar, will merge FBZ into BancABC Zambia to create a group with assets, as of the end of 2015, of around $567 million.

Researchers have confirmed the discovery of new helium reserves in Tanzania, Robert Lee Hotz reports. The discovery could ease a critical shortage of the gas, which is essential for many modern technologies such as MRI scanners in medicine, industrial leak detectors, and nuclear energy. Researchers estimate that the gas field in the Tanzanian East African Rift Valley contains 54 billion cubic feet. The find could total twice the amount in the U.S. Federal Helium Reserve, which currently is the world’s largest single supplier of the element.

The expanded Panama Canal opened to ship traffic last weekend, promising a boost for the country’s already robust economic growth, José de Córdoba reports. The expansion of the canal to accommodate larger ships could push growth rates above 6% in coming years, Fitch Ratings said. The increase in tonnage passing through the canal will spur growth in related logistic, maritime and commercial activities that represent 25% of Panama’s GDP.

Liquified natural gas tankers are expected to be among the biggest customers of the canal, the US Energy Information Administration says, noting that 90% of the world’s LNG tanker fleet can now fit through the canal, versus 6% before.

Venezuela is likely to maintain currency controls until it gets new government, according to Caracas-based consultancy Ecoanalitica. Although officials this year have been weakening the secondary official dollar exchange rate toward the black market rate, Anatoly Kurmanaev writes, the full unification is unlikely, however, given the lack of dollar reserves to maintain the new rate.

The country’s woes look set to continue deepening with the news that its oil output will plunge by up to 350,000 barrels per day this year to around 2.21 million b/d. The decline is driven by power outages caused by the national electrical crisis, lower drilling activity caused by debts to service providers and the natural decline of mature fields in the west of the country.

That decline will only heighten tension with neighbor Guyana, whose oil ambitions Venezuela’s president Nicolás Maduro alleges are part of a US-led provocation. Oil giant Exxon this week announced a major find offshore of the tiny South American nation, Kejal Vyas writes. Venezuela claims nearly two thirds of its neighbor and Maduro last year cited the border dispute to justify passing an executive order that declared a national emergency and concentrated more power into his own hands.

German Chancellor Angela Merkel confirmed on Tuesday that the European Union would extend economic sanctions against Russia, Laurence Norman and Zeke Turner report. Saying an agreed cease-fire in Ukraine never got off the ground, Ms. Merkel said that she and French President François Hollande made clear to EU leaders in Brussels “that the extension of the sanctions…is sadly necessary.”